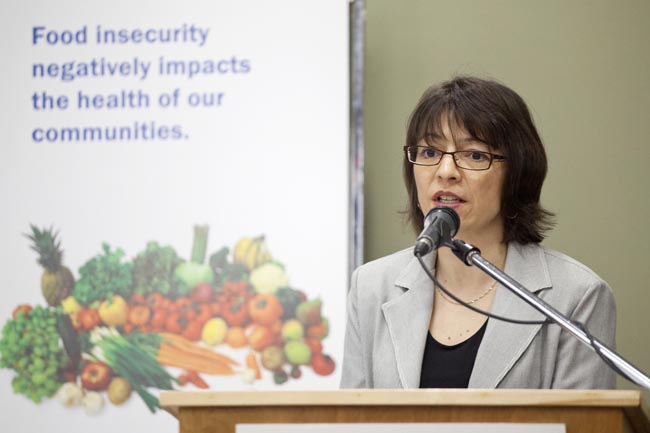 May 10, 2011, Halifax – The results of the 2010 Nova Scotia Participatory Food Costing Report were released at Mount Saint Vincent University, and the findings show that many Nova Scotians may be at risk for their health because they simply cannot afford to eat healthy.

“Food security, which means that everyone at all times has access to enough healthy and safe food, is critical to our physical, mental and social health,” said Dr. Patty Williams, Canada Research Chair in Food Security and Policy Change and Associate Professor, Mount Saint Vincent University. “Overall, it is clear that the low income households represented in our study simply cannot afford to purchase a basic nutritious diet, placing them at risk for poor health.”

Since 2009, there have been several positive policy changes; the province released its Poverty Reduction Strategy, which included an increase to minimum wage from $8.60/hr to $9.65/hr. And recently, the Nova Scotia government announced increases to Income Assistance personal allowance rates of $15 per month.

However, the report suggests that a basic, nutritious diet is still simply out of reach for families living in low-income situations. It highlights the need for further review of wages, income supports, and social policy directed toward poverty reduction to ensure that all Nova Scotians have adequate resources to support their health and well-being.

“Our current system is not adequate, and it’s forcing families to make some very difficult decisions,” says Dr. Williams. “In households with inadequate incomes, the food budget is the most flexible and is often used to cover other fixed costs such as shelter, power, and transportation – all of which are also on the rise.”

Researchers also stress that food insecurity is a provincial issue and one that affects the cost of health care in our province and our society as a whole.

The Department has committed to fund ongoing participatory food costing to help to monitor income-related food insecurity and engage partners from diverse backgrounds to work together as a means of building food security in Nova Scotia.

For more information about the project, please visit the Participatory Food Costing Project