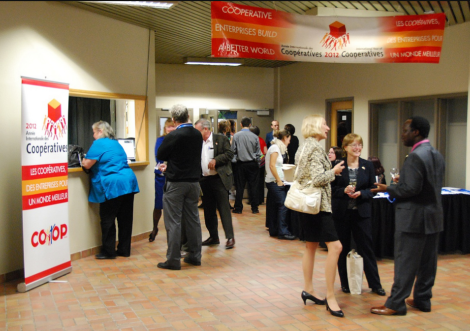 A blog post by Irena Knezevic on the Local Organic Food Co-ops Network website shares highlights from the Co-operating to Build a Better Nova Scotia Conference held November 22-24, 2012 at Mount Saint Vincent University. She also sheds light on some of the history of the food distribution model in Canada and elsewhere.

Here is an excerpt from the article:

Ian MacPherson, the Founding President of the Canadian Co-operative Association, writes about Theodore P. Loblaw’s 1919 stint with the United Farmer’s Co-operative. MacPherson describes how the unsuccessful attempt to create a chain of co-op stores in Ontario was interpreted as a shortcoming of the co-op model, rather than its flawed implementation. The failed Ontario experiment would lead Loblaw to found Loblaw Groceterias, the precursor to Loblaw Companies Limited – Canada’s largest food retailer – setting stage for a very different food distribution model that now dominates the Canadian foodscape.

Their stories ended up doing much more than showcasing the organizations they represented. They provoked a lively conversation about the social and environmental failings of the dominant food system. They highlighted how these organizations are more than just interesting examples, but also potent models for a better food system. They reminded us that alternatives to “big food” do exist and that these alternatives should be learned from and celebrated. Most of all, they offered hope. As 2012 – the International Year of Co-operatives – drew to a close, this conference was a powerful reminder that another world really is possible.