On March 2nd, the Food Action

On March 2nd, the Food Action Research Centre (FoodARC) shared its most recent report on whether Nova Scotians can afford to eat healthy at an event hosted at the Dartmouth North Community Food Centre.

Since 2002, FoodARC and its partners have carried out participatory food costing every few years to examine the question: Can Nova Scotians with low incomes afford to eat a healthy diet?

This question is important because we have seen increasing food insecurity across Canada, and because Nova Scotia has the highest rate of food insecurity of all Canadian provinces.

Participatory food costing is unique in that people with experience of food insecurity (primarily women) participate in all aspects of the research process, including doing training and collecting data on access to a basic nutritious diet in grocery stores across Nova Scotia.

The FoodARC team would like to say thank you to all those who came out this morning to the launch of the 2015 Report on Participatory Food Costing.

Special thanks to the Dartmouth North Community Food Centre, Catherine Martin, Deirdre Lee, and Corrie Melanson for their enormous contributions to today’s event. 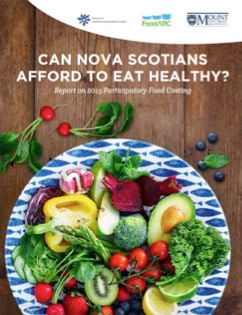 Find this report and previous Food Costing reports in our projects section.

A collaborative dialogue about possibilities for shifts in policy to support healthy, just, and sustainable food systems for all

The launch of our 2015 Participatory Food Costing report was an engaging and interactive event where we shared our key research findings, and the impacts of two policy levers in addition to a set of recommendations that build upon our previous work.

At the heart of it, the release of the 2015 Report on Participatory Food Costing in Nova Scotia was for those who want to create a sense of possibility for shifts in policy to support healthy, just, and sustainable food systems for all.

We wanted to share what we heard back with you, those who attended and anyone else interested. Social media also played a role in the event, so we ‘storified’ the event, which we would love for you to check out and share.

Find out more about the research project: Looking Back to Move Ahead